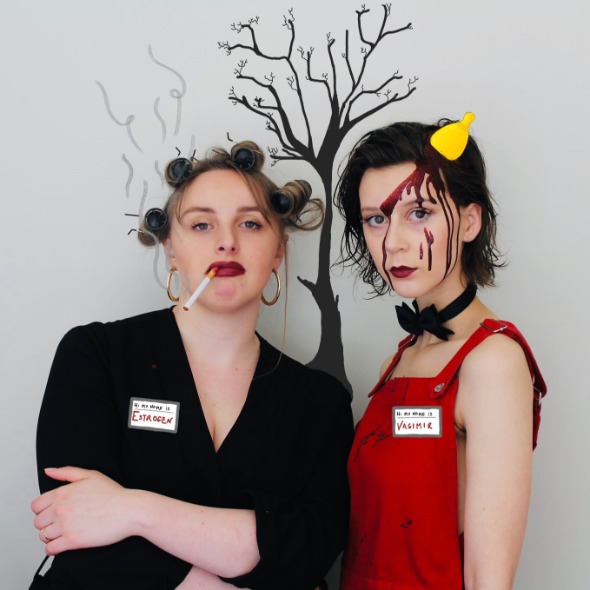 Waiting for Shark Week is a brand-new feminist comedy show. Vagimir and Estrogen are stuck in the Patriarchy waiting for the arrival of Equality. Prepare yourself for: silly sketches, fun clowns, vignettes of old Hollywood films and classic plays reimagined to give womxn agency and make stuff pass the Bechdel test. We'll explore how some dead men (#notalldeadmen) impose their sexism from beyond the grave and deconstruct reasons like "women don't have prostates and couldn't portray the characters accurately". If only Beckett had known that womxn can pee too.

Despite the feminist shows and performance/creative opportunities for womxn*, theatres still keep putting on canonical works that exclude these very same people (to name one, Waiting for Godot). Why? Why perform those shows anymore? And why can’t we do them too? This show challenges that in a funny and clever way. We want to have fun with our feminism; we want to put up a show that addresses past and present misogyny and queerphobia, but we want to play, laugh, and bring joy to others while doing it.

You don't have to be a womxn or identify within the LGBTQIA+ team to have a good time at Waiting for Shark Week. If you're a straight, white, cis-man, we'd love to have you too.

Directed and co-written by award-winning playwright and director Lori Leigh.

*this is not a typo! 'womxn' is an alternative term for the English 'women', coined in 1971 at UC Davis. Read more on this here, by Knotty Vibes.

This is a Kākano supported work. Huge thanks to Creative New Zealand and NZ Fringe.