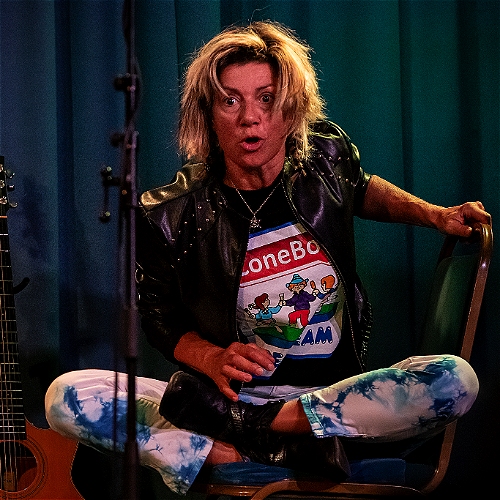 ConeBoy is a music, spoken-word and drama show from writer and musician Clive Parker-Sharp. Clive was at the forefront in the British punk movement, with such bands as Spizz Energi, Athletico Spizz 80, The Members, and a founder member of 80's rockers Big Country. As an author he brings his second book alive, the semi-autobiographical ConeBoy, with collaborator, actor / singer Marshall Star in a funny, poignant and cutting take on the media from the 70's to now, via the lens of a boy made famous because of his appearance. A book event like no other!

The Members, Spizz Energi, and Athletico Spizz 80, are a few of the pioneering punk rock groups CP has played with, as well as being a founding member and songwriter in 80s rockers Big Country. He also played with Jesus and Mary Chain spinoff The Expressway, and collaborations with art rocker Marshall Star.

'I went along to this last night – Clive’s put together quite a beast here; not sure which of the animal kingdom, but I was pulled through an emotional roller-coaster – funny, poignant, cutting, raucous, all pasted together with a bunch of amazing original songs, played by him and Marshall. It’s no surprise Clive’s been at the cutting edge in every band he’s rocked up in – Coneboy is eclectic and on the nail, and, I got a signed book! – Anne Ford / Rye

CP and Marshall, tease out his book semi-autobiographical ConeBoy, with live music,