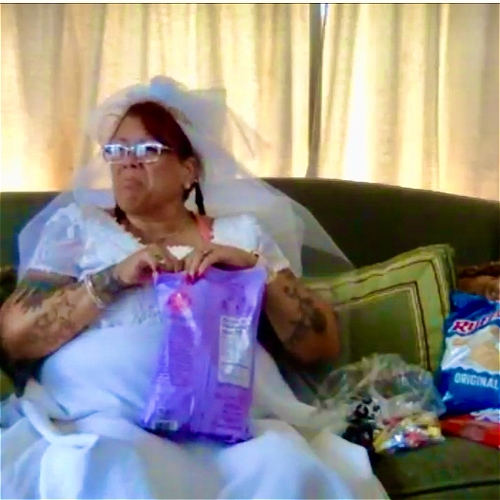 Somewhere in an urban Canadian Province, jilted bride Spencer Houle is marking the 10th year of her would-be wedding date shut in her apartment binge-watching period piece movies wearing her $5000 Vera Wang wedding dress. Her Neechies, Maggie, Linda and Carm, life-long friends from the same Anishinaabe reserve determine all Spencer needs is a weekend of nightlife and dancing to mend her broken heart. But, chaos ensues when Lewis Longclaws, Spencer's ex-fiancé unexpectedly shows up at the Salsa and Mambo dance club: an arrow is fired at him by a mysterious shooter. Probable cause lands the Neechies in jail for attempted murder and questioning. But the Neechie's have credible intel on Lewis Longclaws's dirty dealings back home and bamboozle police weaving hilarious stories about UFO's Sabe (Bigfoot), trips to the Pas, ingrown toenails and Spencer's $5000 Vera Wang wedding dress.  As the night progresses in the holding cell, old wounds and grudges are stirred up and Spencer learns the real truth about her ex-fiancé. Justice finally prevails and the Neechies are exonerated and released. Jo MacDonald (Anishinaabe) writes Indigenous comedy gold displacing stereotypes to re-represent Indigenous female power and the enduring bonds of sisterhood.

This event will be available on demand during the festival 18 Feb - 12 Mar. If you'd like to be the first to know when the link becomes available email boxoffice@fringe.co.nz