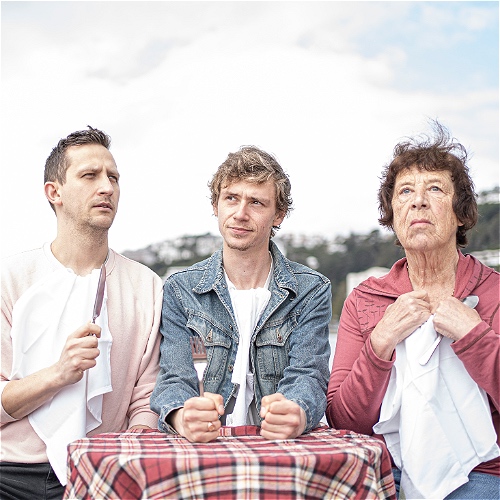 Comedians Kris Beattie, Severin Gourley and Lorraine Ward take up the mic for an hour of delicious stand up comedy.

Four-time Wellington Comedy Award nominee Kris Beattie is a regular performer and emcee in Wellington. His comedy stylings suggest a lifetime of deconstructing all that’s trivial while very much being on the charm offensive. Born in England, now a New Zealand resident (address not provided) with pending citizenship, he has all manner of inaccurate and unreasearched observations about stuff...and things! He's very keen for you to see him perform using your eyes, and thanks you in advance for doing so.

International comedian Severin Gourley (Best Newcomer Nominee, 2016 Wellington Comedy Awards) delights the audience with quirky observations about life, work and the internet. He twists jokes with cynical quips and deliciously dark punchlines. He has performed around Wellington on such shows as The Medicine, Young Guns and The Dank Comedy Show as well as being a Wellington Pun Battle Finalist. He has also performed in Tokyo, Japan on such shows as Get on the Mic! in Toshima and Live English Standup Comedy Open Mic in Asakusabashi.
"He refers to pop culture and engages the crowd throughout... I am laughing louder and harder than anyone else." - Catherine Hart, Art Murmurs

Lorraine Ward has been performing comedy in Wellington over a number of decades. Her original material, in the 1990s, dealt with being the parent of a teenager. She now expounds on being a grandparent and the glories of being a Goldcard holder. She firmly believes that growing older is fine, and growing up should be optional. Lorraine truly is one comedian you don't want to miss.

Comedy Live Parts 18+
Back to Programme