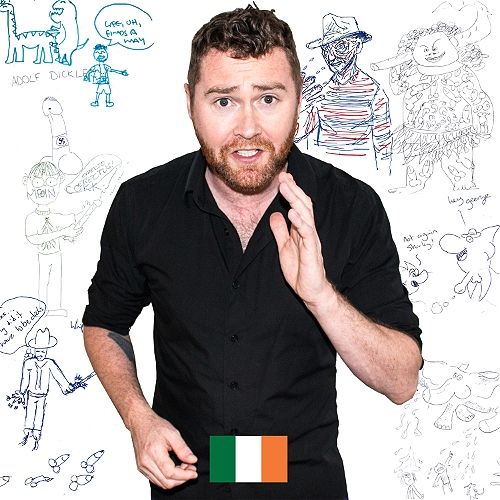 From medieval monks to modern day pub quizzers, people have been obsessed with drawing dicks. While running his comedy pub quiz nights, Alan McElroy, realised that almost everybody draws a willy! He is inundated with a plethora of penis pictures… “Draw the Eiffel Tower”, They draw a phallic todger tower!
Over the years, Alan has collected a gallery full of these pecker portraits and will brilliantly incorporate them with hilarious anecdotes in the wonderful, Willy Doodles

Alan is an award winning comic, an actor and MC. Originally from Ireland but now is a NZ citizen. He has performed at the Edinburgh Fringe, Electric Picnic & before the pandemic, was fresh from performing to sell-out crowds in Australia with the Full Irish shows & a 5 STAR review. His 2019 show, Alan McElroy is S#it @ Twitter, at NZ International Comedy Festival received rave reviews and more stars!

"Willy Doodles is one the funniest takes on how people twist a drawing challenge I have ever seen.  Think Olaf from Frozen as a dick and you're there"

Joanna and Camera, Dunedin Fringe
☆☆☆☆☆“Excellent Irish storyteller performing a hilarious night of comedy” Funny Tonne, Melbourne International Comedy Festival
“A very enjoyable hour of comedy. There is never a dull moment, as McElroy’s is able to find the funny side of any situation..” - The Speakeasy
☆☆☆☆☆"Alan McElroy is the Energizer Bunny of the comedy world! Comically bouncing around the stage with a full AA battery, never once falling flat!"
Pumpkins in Trees by Michelle Beard