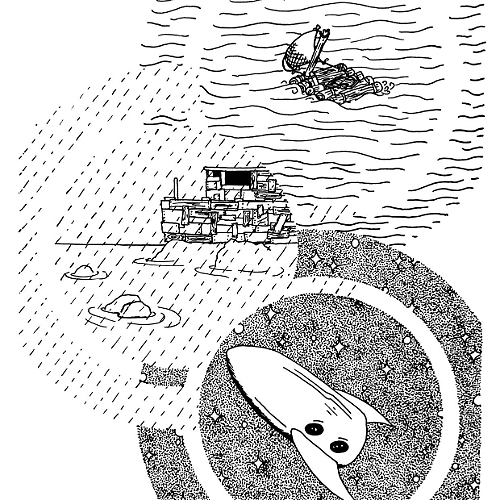 The word apocalypse comes from the ancient Greek word 'to reveal'. Revelation, or the uncovering of something which has been hidden, abounds in this new play by International Institute of Modern Letters MA Scriptwriting graduate Julia Ludbrook. These revelations are on both a personal and global scale as the end of the world precipitates a crisis in the lives of each character.

There is writer-turned-corporate-sellout Jared, who resents the muse who abandoned him after he "took 150 pills and woke up 3 days later in a room with a plastic mirror." He is revisited by this muse as he dies of starvation on a life raft. The conflict that follows explores the interrelations between inspiration and mental illness in a society that undervalues creative self-realisation.

There is Evelyn, a decidedly modern woman forced to contemplate her reproductive duties as the last woman on earth. Will she compromise her feminist ideals in order to perpetuate the human race? Will she be able to nurture another being, a relationship, a less destructive way of being in the world?

And finally there are Jon and Wizard, unlikely climate change refugees who also happen to be on their first Tinder date to Mars. Wizard's tendency to overcompensate for deep insecurities and lack of magical ability results in the play's final "beautiful and poignant" image.

This is "an extraordinary piece of writing" that is "extremely ambitious in its efforts to deal with large, apocalyptic themes". Both the gravity and the levity of the situation is present in equal measure. "It is bold and often poetic, surreal particularly in its representation of the inner workings of the mind. Evelyn's drug-induced state and her desire to rid herself of the responsibility of carrying the last child is especially well-expressed."

Lighting designed and operated by Zoë Higgins
Set by Moniq

Theatre Live Parts No Restrictions Accessible
Back to Programme